Nice video… looks like it is not an impeller jet like the awake vinga (pressure principle), but more like a small propeller in a long duct…
Similar principle as waydoo efoil is going with their new waydoo flyer plus and their 115mm full ducted propeller …
If the given value of 2 hours battery range is true, then it would be top notch

and beating most other efoils there… Congratulation audi etron efoil team

Yeh, it’s certainly not a jet in any form or function.
Has to be much less propulsion from that tiny prop.
The covered prop “seems” like a real plus but Lift (for example) kills the motor when the board reaches a tile angle that suggests it can’t recover. It also cuts if the controller hits the water.
Still a nice feature that I think will become the standard in time.
Quiet and longer run times could indicate it’s putting out less power.
What is the top speed is the prime question with a ducted prop I think. Appeared pretty slow in the video. (and not mentioned by this reviewer Great race, I suggest to make a small handheld esurfer flag to hold it during promo shoots for more exposure!

The first review article about the Audi eFoil: 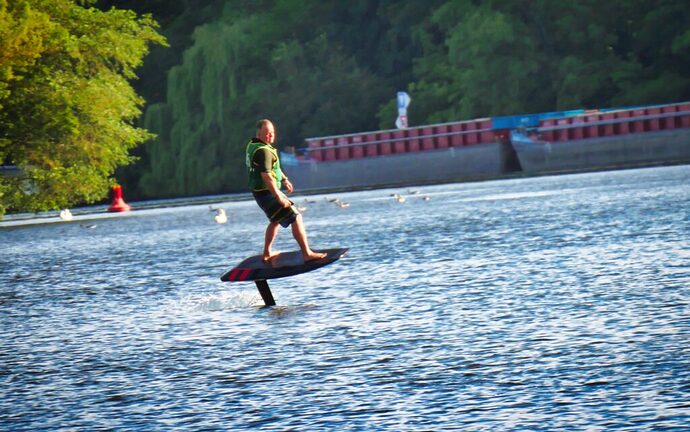 Great article, would love a comparison of vinga vs audi when you have both of them and lets see if more jet efoils come to the industry.