It is is not an adapter for the Rävik Jetboards, but a full eFoil. Some innovative new features such like CLICK-TO-Ride which let’s you assemble the board in 30 seconds without any screws or cables.

Read some e-surfer exclusive insights beyond the press release at: https://e-surfer.com/en/awake-vinga-efoil/ 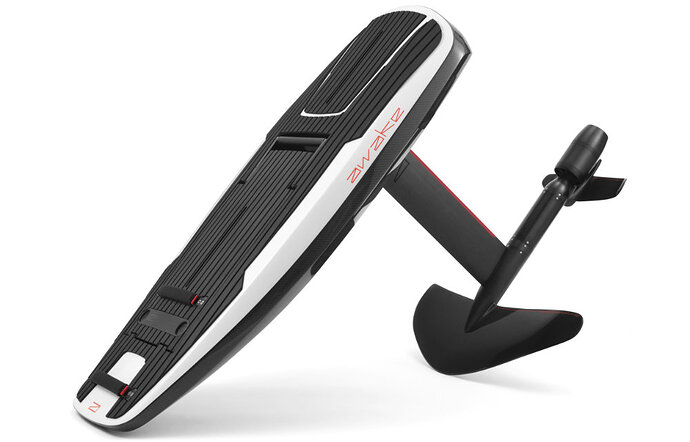 Very interesting trend with the jet propulsion efoils! Looking forward to try it

Looks cool! I do like the “plug and play” simplicity.

I am still looking forward to trying out my first efoil in general.

Experienced riders out there, do you feel there is a significant risk with a prop and its prop guard in place?

Pricing so far for the impeller boards exceed that of the prop boards.

So my question is, does the risk of injury from a prop necessitate the move to an impeller or jet propulsion? and the added cost?

Looks cool, but I wonder why they didn`t do a jetboard-efoil hybrid…

I am not a big fan of hybrid solutions. It is better to make one thing perfect in my opinion.

There is certainly some risk, but if you are an experienced rider you can deal with it. It is important to respect the eFoil and act with care.

If you feel unsure, better go the safer way.

Looks cool, but I wonder why they didn`t do a jetboard-efoil hybrid…

it’s kind of hybrid, they use the same battery for both and same remote. only different is the board and foil.

Ok understand, but I think hybrid will come sooner or later…
I see awake is using similar fast setup click in system as waydoo… Good to see that more manufacturer use this fast assemble method without cable stuff now… That is what I really love on the waydoo flyer efoil as well

But interesting to see that even chinese brands get copied now

Copy of waydo? Awake had this no-cable plug system and flex battery since their first model back in 2018… It’s also the first on the market (together with audi etron) efoil that will have a jet instead of a prop.

nice, interesting to see how it performs (vs audi, vs prop), just worried about total weight, the “no-screws” may seem nice but the mast -foil in one piece isn’t so practical in a car , still will have to play some screwdriver
just the mast plate , which should carried the esc, looks very fine, great they could do that in this space with waterproofing and cooling

Feels like waydoo copied everyone to me. No cable plug in has been around for a while. And the motor in the fuse is a direct copy from Flite!

Great video. Thanks for sharing!

Interesting … see the benefit of the jet vs. propeller. Certainly seems like it would be easier to jump, been trying to figure out how to put foot straps on my eFoil. Looks like there is a significant price premium. Any ideas on what the top speed is and when it will be available in the US? Haven’t had any personal injuries with my Lift eFoil, but did have a duck dive under water in front of me and end up in the prop. Not a good day for the duck

They say they will focus on EU market this year and worldwide next year. Lets see how it goes! Very interesting trend with jets instead of props. it might be a key element to future mass adoption and laws allowing it. Public always sees open prop as “danger”

I agree but it’s mostly for EU regulation i think, the public and regulators see open prop as danger. The foil itself is not more danger than on any other foil sports, no different to wing foiling, kite foiling etc

So nice to see Awake comes with the similar modular assembling philosophy, waydoo invented already in 2020- this get`s you on the water much easier and quicker…
As Jet impellers always need more energy, the awake has a massive battery…and thats the main reason why it’s so expensive… As battery cells price increase constantly this is already almost half the production cost of an efoil…
As jet impellers can never be as effective as propeller driven efoils, perhaps a mixture of both will be the solution…Be curious about what’s to come in the future…