The future of foiling

To those close to the foiling community, it may seem we’ve entered the mainstream, but I believe that the sport is just getting started. We’re finally starting to see small groups of surfers adopt the foil for their small wave needs. In wind sports, wing foiling is officially taking over. Kitesurfers are making a complete move, and windsurfers who haven’t contemplated rigging a sail in the last 20 years are now coming out of retirement to start winging on a foil board. In the world of electric, more and more eFoils are starting to pop up in the wild and as houseboat owners cruise around with multiple outdated jet skis on the aft deck, they ask themselves, “Why don’t we have one of those?” The first person foiling was a kook, when it was two people they were weird, and now, with gangs of foilers at local breaks and WhatsApp groups excitedly messaging each other about one-foot surf, we have ourselves a movement. If you look closely at the strange trends, you can start to visualize the evolution of a new sport with multiple segments. 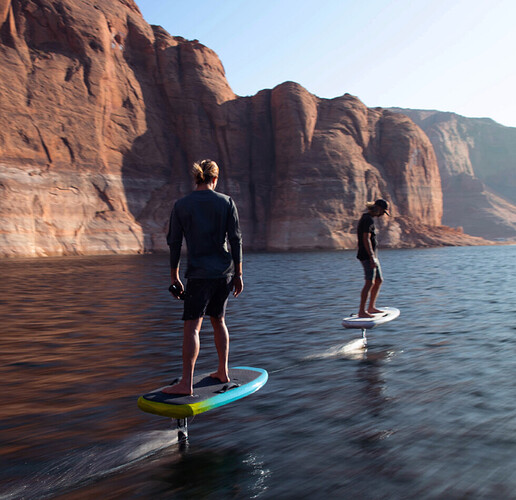 I see two advancement trends in foiling. The first is the early advocates, the ones who have been on the edge of the sport for years, who are going to achieve levels of mastery that are simply beyond what we can even comprehend today. I see it now with riders we work with at Lift. Some are only a few years into foiling, some are still in high school, but they’re doing flips and tackling waves that seemed insurmountable to pioneers just a year ago. I firmly believe these riders are going to be flying out of barrels, riding huge waves at incredible speeds, and doing acrobatics similar to what we see in the world of snowboarding. Have a look at what people achieve behind a boat on an Air Chair and then combine that with fearless young surfers on large waves, light equipment, and foot straps. These young guns may even adopt an eFoil as the tool needed to get them launched into such surf…

The second is that we’re going to see the infrastructure building quickly for further mainstream adoption, education, and enablement of new riders in all types of foiling. This is going to mean more brands jumping into the sport, more schools and lesson opportunities, and an increased desire from people of all skill levels to try foiling. The multiple branches of foiling—surf, SUP, wake, kite, wingdings, eFoils—are what will create so much attention and what will offer an avenue for everyone. We’ve signed up hundreds of schools and rental areas to represent and showcase Lift eFoils in the last two years alone, and that speaks to the excitement that’s going to continue across all areas of the sport.

Foil designs and equipment will continue to evolve. Wing designs will start to be refined for more specific applications. Just as you have different surfboards for different kinds of surfing, the same is true of hydrofoil designs. I think the most exciting will be the adoption of smaller wings as foilers discover an incredible amount of speed and maneuverability in more powerful surf. Glider wings will allow for the endless riding of small waves and the ability to tap into open ocean swells and chop. It will no longer be people riding at specific breaks but instead riding their entire coastline…

Winging will allow for a new wave of excitement in the world of sailing as new people take an interest once again in the ancient art of riding the wind. What’s most exciting is that “non-surfers” will learn to wing foil and surf open ocean swells in a matter of a few lessons— something that traditional surfers have never dreamed of. Skilled sailers will create rigid wings (true foils) that allow them to reach new speeds and a whole new category of racing. The world of electric foiling is endless and new crafts will appear that will excite just about everyone. The combination of tech and tradition will soon meld into new levels of the sport. Just wait and see what we have in store for you.

At the end of the day, it’s no longer a question of whether or not foiling will become a mainstream sport; we’re past that phase. It’s a question of how far we can take it. I have so many ideas flowing that as soon as I finish one new design, I’m seeing three more in front of it. The potential is crazy, and as the community continues to expand, everyone will contribute more and more to the development of the sport. That’s the most exciting part of it all: community, and finding new levels of stoke with your peers, and sharing new ideas that shape the next level of surfing for everyone.