The things nobody tells you about efoils

I have practiced different sports and usually there is something that is not very pleasant but you don’t know it before you start practicing regularly.
I wonder what is this thing for Efoiling, since I still don’t have efoil.

I will give you a few examples rock climbing-constantly bruised hands, atv- a lot of mud or dust nothing in between, MTB downhill- harsh ride despite suspension, snowboard/ski- perfect riding conditions only a few times in a season

A lot of things… It depends where you ride.

If you are in Berlin, it’s probably not very pleasant to ride in the middle of January on the lake. If you are here in Portugal, same issue but different. Sometimes I have winds and storms for weeks and can’t get to the water. A lot of things must be right to get a great experience.

The main downside of efoils is heavy weight in my opinion. Sometimes the idea of carrying 35kg to the beach, then to the water, then back totally kills the vibe and I know many of efoiling teachers are actually preferring other sports most of the days (wing foiling, kite foiling etc) for themselves after they perfected efoil.

Another thing - efoil like any other sport can get boring if the only thing you do is just cruising around same place but does not want to progress further and practice better rides, better wings, smaller boards, waveriding etc.

Other than than efoiling is super fun activity on the water.

Thank you for your reply, I am located in Sofia Bulgaria, I have a few lakes in half an hour drive distance, so I am planning to ride mostly on them.
December to March will be too cold for me, but outside of that I don’t expect any weather issues.

Is there something else that you can think of?

This was my first efoil experience 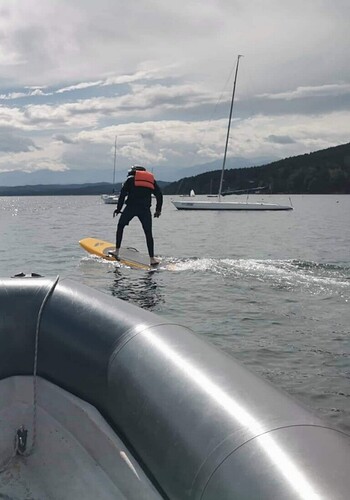 You’ll get some bruises from hitting the board during wipeouts. More so when you start foiling versus initial surfing with the board on the water. And its not as easy to separate from the board all the time as it happens quickly.
Most people will need to build up their leg strength to be able to go any length of time. At first we were usually tired before the time the battery was getting low.
Other than that its very ‘gentle’ moves and lots of balance and core use.

The biggest “risk”, and virtually unmentioned by almost all, it is removing the guard from the prop. My foot has contacted the guard a few times and I just can’t get comfortable with that 7(?) hp electric motor (that’s a lot of torgue) spinning that prop very fast within leg distance. All but 1 time was when stopped and reboarding, so motor off and no risk, but reinforces that it’s right there within leg length if you extend. Many do it and get much better performance.
But I doubt we ever will. FWIW